Mark joined Uncle Bill on air, along with Gubbi Gubbi Elder Professor Boni Robertson, to discuss the essay and to ponder whether unfinished history is holding Australia back.  An edited extract of the essay is republished with permission below.

.@UncleBlinky & I had a good yarn about the new Quarterly Essay via @BlackIncBooks by Mark McKenna today. I encourage everyone to read ‘Moment of Truth: History and Australia’s Future’. See https://t.co/fzdowIOnrl 👈🏽 pic.twitter.com/mpjg45VoLU

James Cook: founder of ‘modern Australia’, or the embodiment of dispossession? 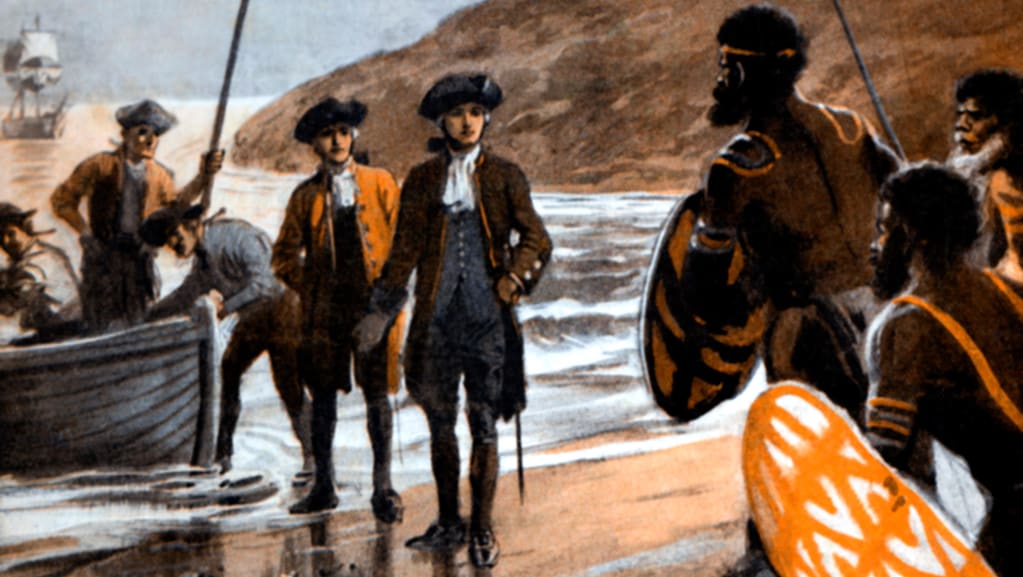 In April 1995, shortly before the 225th anniversary of Captain James Cook’s landing at Kurnell, on the southern shores of Botany Bay – the country of the Gweagal clan of the Dharawal nation – Sutherland Shire’s mayor, Genevieve Rankin, consulted Dharawal elders. They told her that they would find the sight of an Endeavour replica in Botany Bay “distressing” and “offensive.” They also planned protests for the day of commemoration. In an effort to conciliate them, Rankin offered to deliver an official apology at the ceremony. But when the press reported that she would offer an apology for “Koori genocide by early settlers,” the Council erupted in controversy and readers contacted the local press to complain. Their reasons prefigured those offered by prime minister John Howard two years later, in his response to the Bringing Them Home report on the Stolen Generations: “we are personally not responsible.” They objected vehemently to any attempt to apologise for the crimes of the early settlers. The celebrations should go ahead, they insisted, without being “hijacked” by special interest groups. Caught in the crossfire, Rankin decided that she would speak only for herself, offering her “personal” apology for the “attempted genocide and dispossession of Australia’s indigenous peoples.” The protests went ahead in any case. Elder Les Davison insisted his people were “not celebrating”. Instead, across the bay at La Perouse, they threw wreaths into the sea and lowered the Aboriginal flag. 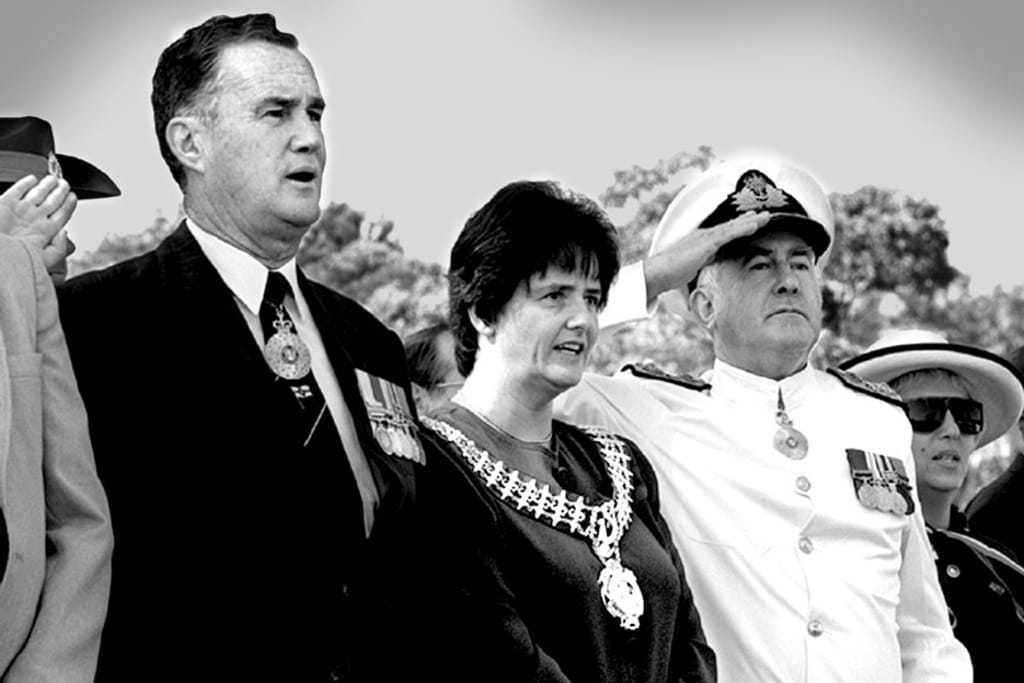 The impasse at Kurnell – which mirrored the stand-off that had divided the Bicentenary celebrations in 1988 – would last in one form or another until 1999, when NSW Tourism announced “a marketing effort to capitalise on the area’s history from a European and indigenous perspective,” positioning Kurnell as a “unique cultural meeting place.” By the next commemoration of Cook’s landing, Dharawal elders and council officials had agreed to hold the ceremony under a new banner: “Meeting of Two Cultures.” Other changes quickly followed. 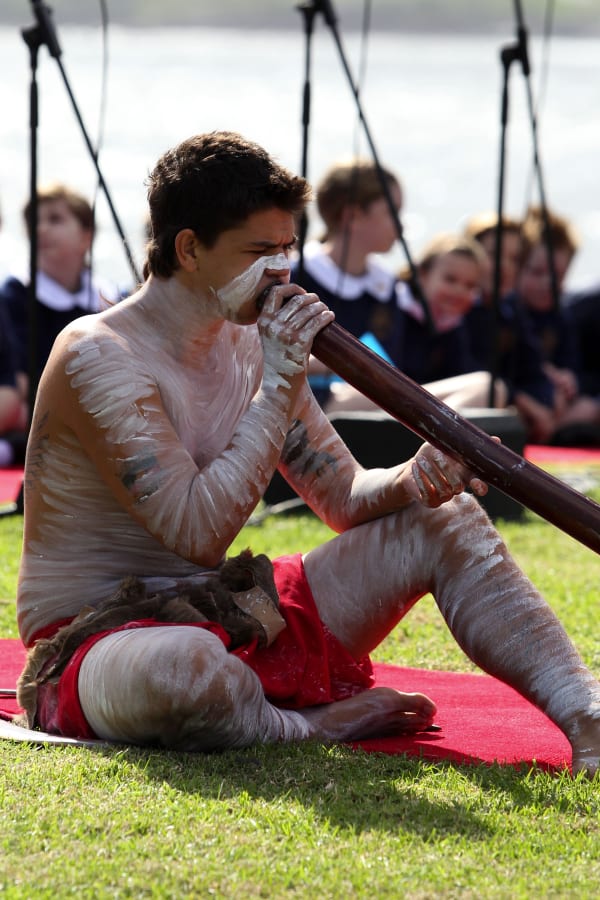 At the “Meeting of Two Cultures” ceremony at Kurnell in 2012. Photo: Lisa McMahon

In 2000, seven years after Sutherland Shire Council modified the “Welcome” sign at Kurnell in a gesture of reconciliation, Kurnell Parkland was renamed “Kamay Botany Bay National Park.” In 2003, the spirit of this shared name was cemented when Cook’s landing site was renamed the “Meeting Place Precinct” and Sutherland Shire Council formally exchanged “reconciliation statements” with Dharawal elders. Since 2000, every anniversary of Cook’s landing has been commemorated through a “Meeting of Two Cultures” ceremony, in which visiting dignitaries, politicians, local Indigenous elders and school and community groups come together to listen, remember and share their understandings of Cook’s visit. Aboriginal, Australian and Sutherland Shire flags fly side-by-side. It has not been without difficulty. Some Dharawal elders have expressed their dissatisfaction with aspects of the ceremony directly to the Council. At the same time, the goodwill and determination to resolve these differences is undeniable.
Advertisement

At the ceremony in 2012, local schoolchildren sang the national anthem in the Dharawal language. Days earlier, Kurnell adopted a new flag which saw the Dharawal whale totem positioned beside the silhouette of a tall ship – imagine a new Australian flag that incorporated Indigenous symbols. It was a far cry from the shrieking and wailing about history in the house on Capital Hill.
When one speaks to people in the Sutherland Shire today, it’s clear that Cook’s story still commands enormous pride and respect. His stately image has graced the council’s logo in one form or another since 1906. He seems to get larger and more mysterious with every passing year. The story of his time at Botany Bay in 1770 has become so layered and multifarious that his afterlife can’t be pinned down. 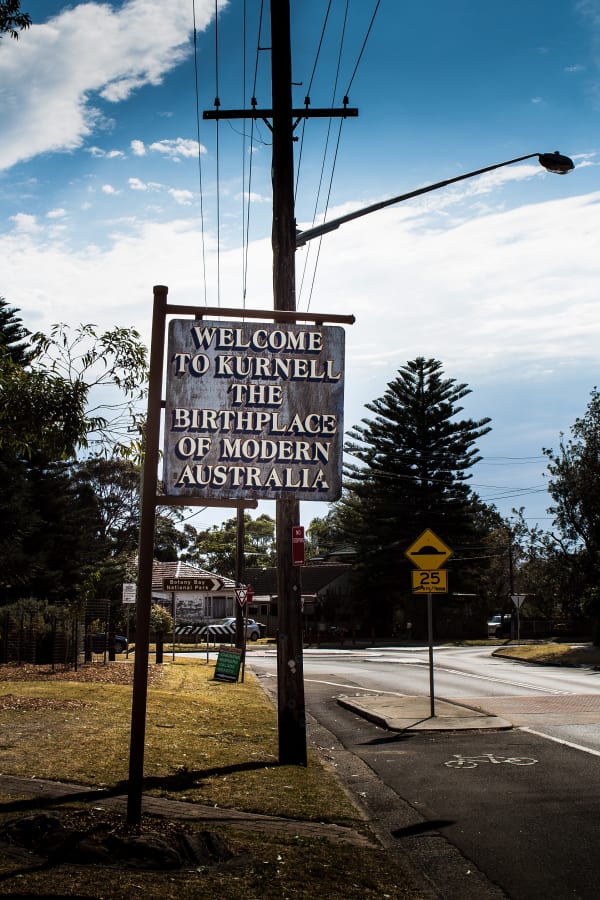 The sign at Kurnell reads: “Welcome to Kurnell, the Birthplace of Modern Australia”. Photo: Stephanie Bailey

Given the transformation of Cook’s landing site in recent years, the old sign should be pulled down before it falls down. A new sign should be erected in keeping with the spirit of the annual commemoration of Cook’s landing: “Welcome to Kurnell: Where Cultures Meet.” To suggest that Cook’s landing at Botany Bay gave birth to “modern Australia” is to leave Indigenous culture exactly where white Australia has long preferred to cast it – as “ancient,” “traditional” and “pre-modern” – bands of men and women who wandered the country in search of their daily subsistence, waiting for history to begin. “Modern Australia” was (and is) created as much by Aboriginal people as by the invaders and their descendants and all those who have come after them.

The name for Cook’s landing spot – “Inscription Point” – embodies the dilemma, overwriting Indigenous histories with the possessive stamp of British civilisation. James Cook’s eight days at Botany Bay have been made to appear more significant than millennia of Indigenous occupation. So many of the attitudes that drove the colonisation of Australia remain embedded in the language we use today – in our placenames, our descriptions of the land, our political priorities, our constitution and our national anthem – that we have only just begun to see that this country was “inscribed” long before Europeans knew of its existence.

As for Cook’s statue in Hyde Park and other monuments to our colonial past, surely it would be more productive to add to them rather than erase them from the landscape. If we explain why the original inscriptions were written, and why we no longer accept them as credible or the whole story, we transform the platitudes, historical fallacies and heroic figures associated with our public statues into sites of learning and reflection. No longer merely ornamental, they suddenly become useful. If we fail to do this, then we fail the most basic test of the challenge of recognition: to change the way we see our history.

In Cooktown, Queensland, where Cook spent seven weeks repairing the Endeavour in 1770 and met fierce resistance after his crew hauled a dozen giant green sea turtles on deck and refused to share them with “the natives,” local elder and historian Alberta Hornsby and Loretta Sullivan, president of the Cooktown Re-enactment Association, are preparing to commemorate his eventual rapprochement with the Guugu Yimithirr as “the first moment of reconciliation in Australia’s history.” Angered by several men who’d set fire to the grass where he’d left a “forge and a sow and a litter of young pigs,” Cook fired his musket, wounding an Aboriginal man, after which the men immediately retreated. Seizing the spears that they had left behind, Cook and Banks were approached about an hour later by “a little old man” carrying a spear “without a point,” with several men brandishing spears walking only a few metres behind him. As he walked towards them, the old man halted several times, “collecting moisture from under his armpit with his finger” and drawing it “through his mouth.” Cook and Banks “beckoned him” to come closer. At this point, the old man turned to his comrades, who “laid their lances against a tree.” Then, slowly, they all came forward to meet one another. After they exchanged gifts and greetings, Cook returned their spears, remarking later in his journal that this seemed to have “reconciled everything.” More than 200 years later, Alberta Hornsby and her late uncle, Eric Deeral, explained the story through Guugu Yimithirr law: how the old man, by drawing sweat from under his armpits and “blowing the sweat on his hands into the air,” was performing a ritual known as “ngalangundaama,” a call for “protection and calm.” In Guugu Yimithirr law, no blood was to be spilt on “Waymburr,” the land on which Cook had come ashore and fired his musket. At last it was possible to understand the old man’s gesture of reconciliation from the perspective of the Guugu Yimithirr; it was a request for his law to be honoured and calm to be restored. For Alberta and Loretta, the story represents an inspiring moment of reconciliation, which they hope will form the centrepiece of Cooktown’s celebrations for the 250th anniversary of Cook’s visit.

The Kurnell and Cooktown communities’ willingness to rethink the way they commemorate Cook’s landing shows how productive acknowledging the past can be. By moving away from the tired cliches of discovery and nation-making that once dominated, they have made Cook a more promising emissary. In stark contrast, it is the federal government, with its absurd claims of “Stalinist interference,” that appears fearful and defensive. For as long as we refuse to relinquish the triumphalist and monovocal view of our past, we seal ourselves off from understanding history as anything other than a crude choice between shame and pride. 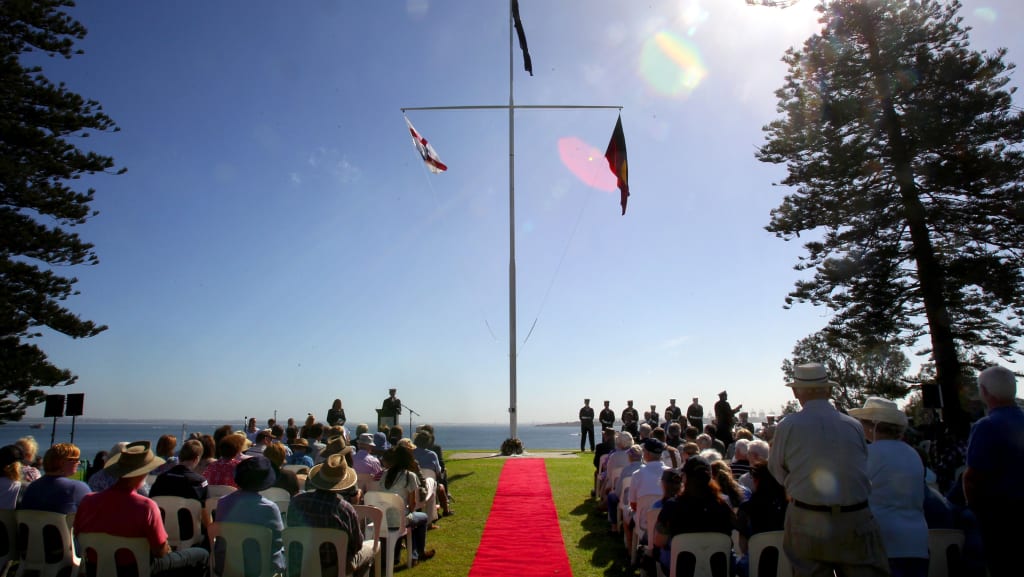 The “Meeting of two cultures” ceremony at Kurnell, in 2014. Photo: Lisa McMahon

In all the stories that have circled around James Cook since he stepped ashore at Botany Bay in April 1770 – the assertions of historical firsts, the fierce disputations over Cook’s statue and the countless ex post facto claims freighted onto the shoulders of one brilliant navigator from Yorkshire – it’s possible to witness a nation hankering for a foundation narrative and its dispossessed people demanding that they be included in that same story on just terms. As the ways of remembering Cook’s landings have changed over time, he has become much more than the embodiment of modernity, invasion and dispossession; he is also the promise of peace and reconciliation. He plants the seeds and is gone. He claims possession without consent, yet he also brings with him the law that will belatedly recognise native title more than two centuries later. He is at once the agent of destruction and the agent of redemption. A man who becomes a story that remains open-ended – a story that continually draws us back, although we know the whole tale will always elude us. Cook can be lionised, misrepresented and reviled, but he can never be banished from Australia’s historical consciousness. We stand forever on the beach with him.

This is an edited extract from Moment of Truth: History and Australia’s Future, by Mark McKenna (Quarterly Essay, RRP $22.99), published on March 19. Mark McKenna is a professor of history at the University of Sydney.